Because we’re expats, we quite often get people over to stay for the day or weekend and we usually take them along to explore one or more of London’s many different interesting areas. But sometimes a visit coincides with one of the Bank Holiday weekends, which means that we get ‘stuck’ with our company for a little longer. And you can only take them up and down Oxford Street or along the South Bank so many times before they get suspicious that we’re just repeating the same itinerary.

So how do we keep them entertained?

The answer is as follows: we take them on a road trip to the South Coast! 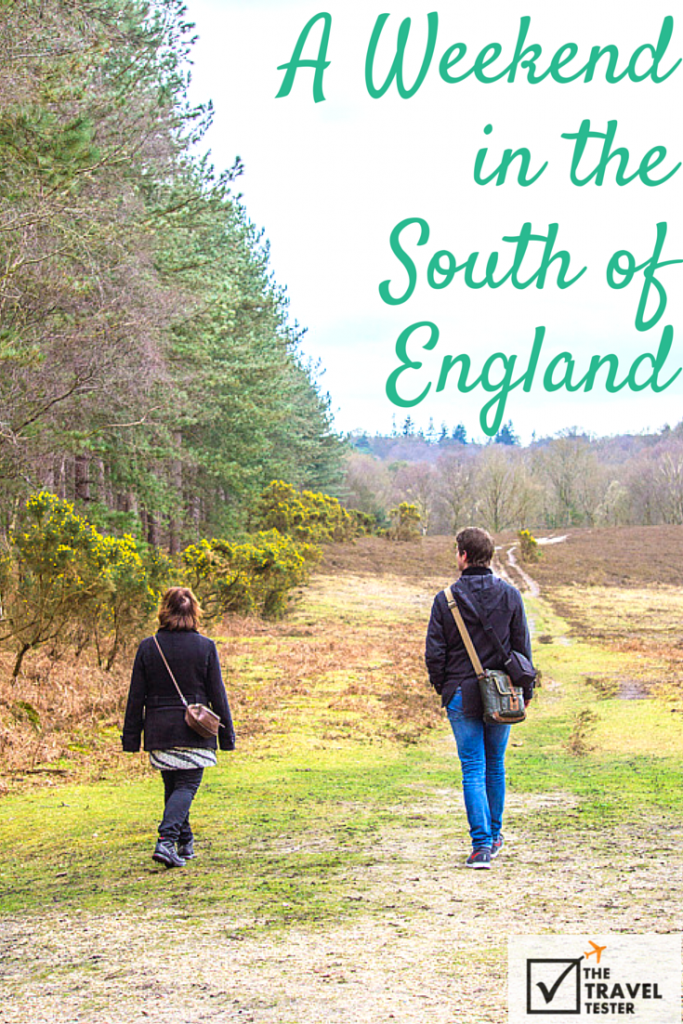 …and we tell them to bring proper walking shoes…

For means of transportation we decided to hire a car and pick it up on the morning of our departure. But little did we know that about half of London had the exact same plan. The lady on the phone who was providing me with the directions to find their office was kind enough to inform me that there was a bit of a queue…

I’ve noticed that British people seem to love queuing and they’re just so used to it that they don’t notice half the time that they’re actually in a queue. So when a British person acknowledges to you that there is in fact a bit of a queue and you might have to wait a little while, well, be prepared…

Anyway, not being too fussy about the slight delay in our plans (we decided that it was going to be a stress-free holiday), we eventually got the car and headed off in a westerly direction. First stop, Stonehenge!

Nienke had been to Stonehenge about fifteen years ago with her parents and was excited to see how much she would remember of it and how much it had changed. I was more interested in the brand new visitor centre, which had been a topic of discussion in English architecture for the last two decades. As far as our travel companions went, they seemed ok with just kicking back and relaxing, letting it all happen.

The drive was unusually lengthy this day as road works and many other holiday makers slowed our progress quite severely and we ended up in a traffic jam that only existed because of spectators looking at the Stonehenge rock formations from their cars.

We arrived at the centre by the end of the afternoon which still gave us plenty of time to roam around the site and look at the very nice exhibition about the history of this iconic landmark.

We’ll be writing a more detailed review of this in a later post so please keep checking back on the website.

As the evening fell, we made our way down to the New Forest Region where we had booked a private accommodation via AirBnB in a small town called Bransgore, just east of Bournemouth and about a ten minute drive from the sea. This proved to be the perfect base from where we could explore the many different parts of this region.

Our hosts were most welcoming and they managed to give us some good tips on where to get some nice traditional British Pub Food. They also invited us to join them for a drink in what they proudly referred to as the best pub in the entire area which made us feel right at home.

Hiking in the New Forest Region

After a good night’s sleep in our cosy annex flat, followed by a fantastic breakfast prepared by our host, we drove to a public parking place in Lyndhurst where we would start a circular walking track.

The track we chose (which is said to be quite popular with hikers) would take us via the meadows through a denser area of the New Forest to the south and back via Clayhill to end up back in Lyndhurst.

The wild ponies that are so iconic for this part of England greeted us as we arrived, although Nienke soon found out that they weren’t all as friendly as they looked, as she nearly got kicked in the back by one.

We also spotted some deer, but of course the photos turned out all blurry as they were just too fast for us

We were strolling around the meadows, jumping creeks and dodging more wild ponies for a good hour and a half when we decided not to complete the whole circuit because it turned out that we had gone hopelessly off track at what was supposed to be pretty much the first right turn.

The Travel Tester in Wonderland

Luckily, the town of Lyndhurst turned out to be quite an attraction itself and it had plenty of great places to have lunch.

It also turned out that this is the town where a lady called Alice Hargraves (Liddell), who was the inspiration for Alice from the famous book of “Alice in Wonderland”, had lived.

Having regained our energy we drove to Lymington to explore the marina, the wildlife conservation areas and the typical landscape of the salt planes. The town looked very lively with plenty of people enjoying the long weekend in one of the many pubs and restaurants around the harbour.

From Lymington you can also catch a ferry boat across the Isle of Wight, which is a great place for even more wildlife discovering and other outdoor activities.

Adventure on the Jurassic Coast

Another great thing about this part of England is that you can get to explore the old Jurassic Coastline with its dramatic cliffs and steep green hills.

We started our walk the next day at an old pub which name we have sworn to keep a secret. But to give you a hint: it’s in an old stonemason’s village full of beautiful looking Portland Stone cottages, which is essentially a deserted town because all the houses are solely used by holiday makers.

The track we followed went down quite rapidly to the coastal edge and through an old deserted Portland Stone quarry, which was now used as a climbing wall for some advanced mountaineering.

But as we have learned from our previous hiking tours, when you go down a hill you’ll inevitably be going up again sooner rather than later.

The views of the ocean and the cliffs were very nice and after about an hour we arrived at a local coastal guard lookout point, where we got welcomed with tea and cakes because they were having an open day.

The majority of these lookout points are now run by volunteers who spend their days monitoring the ocean and providing an extra pair of eyes for the professional coast guard. The volunteers explained to us with great enthusiasm of the function they provide and how important it is what they do.

After this we made our way back to the pub for a nice and well deserved glass of home made cider in the beer garden while enjoying the lovely afternoon sun. Inside there was a band playing live music which only added to this picture perfect sunny Sunday.

No (first) trip to the South Coast of England is complete without a visit to the famous town of Brighton. But if you’re short on time, try to avoid the peak days because it can get incredibly busy.

It became well known in the 18th Century because the Prince Regent (George IV) used it as his seaside getaway and due to the increasing popularity of sea bathing. George IV also commissioned the architect John Nash to redesign the Royal Pavilion, a spectacular looking Palace that still exists today and which serves as a museum and even a wedding venue.

In the 1840’s a direct railway line from London to Brighton was established, which made it a very popular destination for day-trippers. This popularity hasn’t changed since.

We strolled along the boulevard enjoying the buzz of the many lively restaurants, bars, pubs and the various stalls selling fresh seafood which looked like a perfect afternoon snack.

The most authentic little fish shop we found was Jack & Linda’s Smokehouse, where time seemed to have had no grip on their business. Unimpressed by the lengthy queue (yes, another one!) they simply kept going at their own pace, serving every single customer with the same friendly smile and sense of humour as the next.

Brighton’s main attraction is of course the large Palace Pier, which is basically one big major fun fare with thrilling rides, games, bars and restaurants.

It can be a great place to observe people enjoying their day out, soaking up the sun on the free deck chairs or to participate in one of the many games.

There used to be a second pier in Brighton (The West Pier) but all that remains of that today is part of the steel structure as it got closed in 1975 and subsequently caught fire twice. The West Pier was originally built as a landing point for ships carrying people across from France, where the Palace Pier was intentionally built for the sole purpose of entertainment.

We concluded our trip with a nice evening dinner in a small restaurant called Fishy Fishy Seafood Brasserie. It’s not very easy to find as it is tucked away in the corner of a square just off East Street, between the Pier and the Royal Pavilion, but definitely worth visiting.

There are many places in Brighton where you can get a good sized traditional portion of fish and chips though the difference in quality is quite notable.

Fishy Fishy has a nice variety in menu options, which you can combine with a good glass of wine and all their food tasted really fresh without being overly pricy.

At the end of our little weekend adventure, everyone dozed off in the car while I drove back to London, back to the city, back to the busy life.

I think we would have easily walked close to 50 kilometres in these four days, but it was well worth it. We felt that we had seen a truly different part of England with a large variety of culture, nature and history and we’ve already said to ourselves that we’ll go back to explore this even further as soon as we get the chance.