Follow The Travel Tester to Malta and Gozo, where the first season of hit TV-series Game of Thrones was filmed!

I’ve never visited a movie location before, but while I was right there in Malta, I got excited enough to visit some of the Game of Thrones Locations Malta and Gozo is rich. And I really enjoyed it, going back into the first series of the show to see what the actual scenes were like.

Please note that all movie stills are copyrighted by HBO. 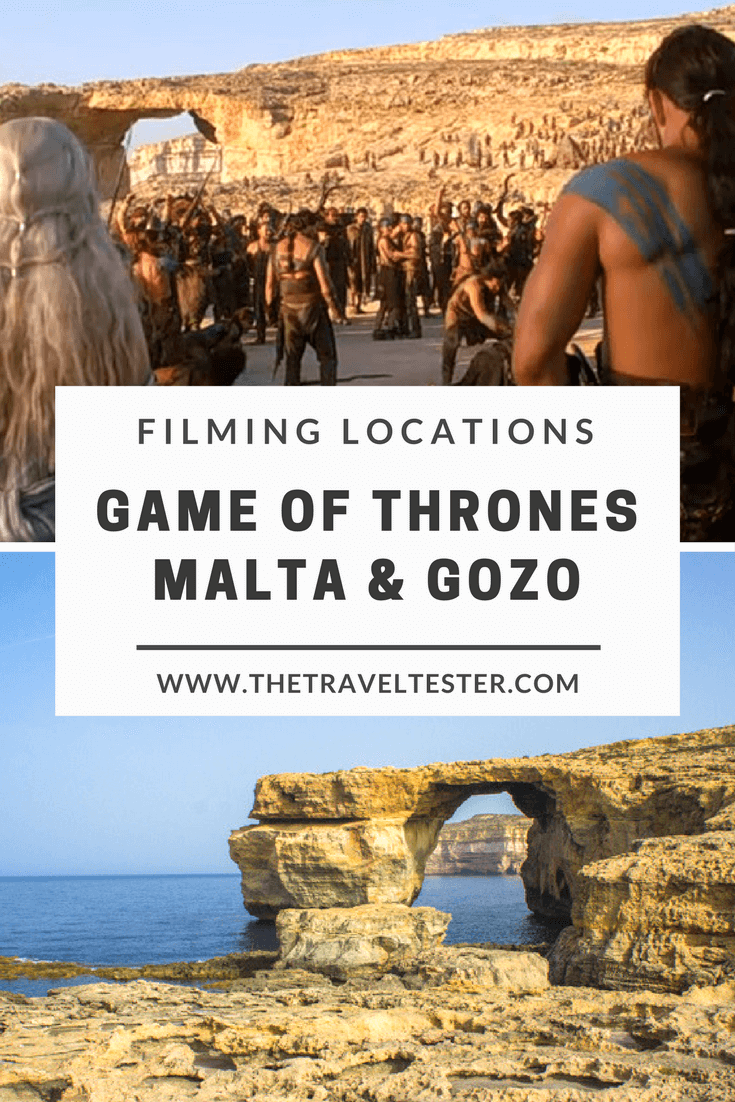 Game of Thrones moved production from Malta in the second season to Croatia, as there was some controversy over damage to the Azure Window and its ecosystem caused by the show’s contractors.

Please note: Unfortunately, the Azure Window collapsed into the ocean due to heavy weather in 2017. I’m soooo sad about the loss of this amazing natural arch! Here you can see what the location looked like:

The Azure Window can be seen behind Daenerys and Khal Drogo’s wedding in S01E01 (“Winter Is Coming”).

Azure Window use for Malta Game of Thrones Filming

Stunning sunset at the Gozo Game of Thrones Location

This fort is used as the Great Sept of Baelor in S01E09 (“Baelor”). In this episode, Joffrey gets Ned Stark to admit to being a traitor and then has him beheaded in front of his children.

I didn’t go up to the fort myself, but happened to spot it from the other side of the water in Valletta!

This convent is used as the Red Keep Garden. Here, in S01E07 (“You Win or You Die”), Ned confronted Cersei over the parentage of her children. Eddard warns Cersei about what he knows and tells her he is going to go public with it.

Later in the episode a messenger informs Ned that Joffrey and Cersei requested his presence.

Visit Rabat on a Full-Day Gozo Island Excursion with GetYourGuide 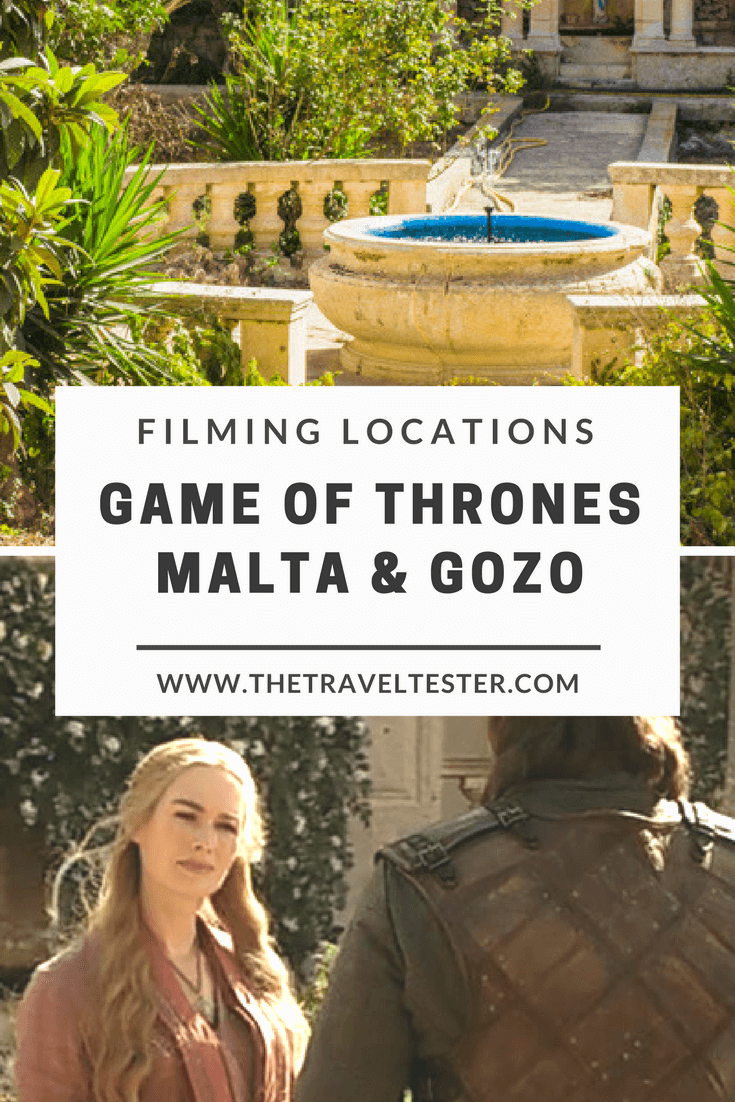 The gates and the gatehouse feature as “The King’s Gate” in S01E03 (“Lord Snow”), when the King’s party returns to the city.

Also used in S01E05 (“The Wolf and the Lion”), when Arya arrives back at the King’s Gate after sneaking out through a secret passage. She then tries to convince one of the gate guards to let her back into the Red Keep.

Unfortunately, I didn’t visit the Fort myself and I’m not sure if you can?

The old gate of Mdina stood in for King’s Landing in S01E03 (“Lord Snow”), as Catelyn and Ser Rodrik ride into King’s Landing to investigate the attack on Bran.

Also seen in the episode later when Ned says goodbye to Catelyn at the gate.

Book a Mdina Full-Day Tour with Lunch with GetYourGuide

The Verdala Palace is the official summer residence of the President of Malta. It is used as Illyrio’s Mansion in S01E01 (“Winter is Coming”) when Daenerys and Viserys meet Khal Drogo out front of the mansion.

This is the scene of Littlefinger’s Brothel, as seen in S01E03 (“Lord Snow”). Lord Baelish shows Ned Stark to his brothel to see Catelyn who had snuck into the city.

Although I was in Mdina, I totally missed out on the fact this place was used as well and I didn’t take any photos here, ahh!

UPDATE: Many, many thanks to our lovely reader Harald for sending in some photos of this location, such a great addition to this post!

Book a Mdina Full-Day Tour with Lunch with GetYourGuide

San Anton Palace is the official residence of the President of Malta, and is surrounded by both private and public gardens. It was the setting for the Red Keep Stables in S01E03 (“Lord Snow”) when the Starks arrive at the Red Keep.

In S01E08 (“The Pointy End”), a number of the Starks’ attendants are murdered by the Lannister soldiers while unloading some cargo from which Arya later recovers her sword.

Also used as Red Keep Hallway in S01E05 (“The Wolf and the Lion”) when Ned is walking through the keep when a messenger informs him that the small council is meeting.

In S01E07 (“You Win or You Die”), Varys and Littlefinger inform Ned that the Goldcloaks are under his control in this place too.

Finally, in S01E04 (“Cripples, Bastards and Broken Things”), this place is used as the Red Keep Gardens when Ned and Littlefinger discuss the actions of the former Hand right before his death.

Fort Saint Angelo is a large fortification in Birgu, Malta, right at the centre of Grand Harbour.

The fort is used as the Red Keep Dungeon. On assignment from Syrio Forel, Arya chases a cat into the tunnels beneath the Red Keep where she overhears a conversation between Varys and Illyrio in S01E05 (“The Wolf and the Lion”).

This place is representing Lhazareen, The Dothraki attack a village and Khal Drogo is wounded in S01E08 (“The Pointy End”).

The Dothraki camp for after Khal Drogo collapses in S01E09 (“Baelor”).

Also the place where Daenerys enters the funeral pyre and emerges in S01E10 (“Fire and Blood”).

Are you a Game of Thrones Fan? Would you go and visit the filming locations on a Malta game of thrones tour?

For more Malta & Gozo attractions and for Game of Throne Tours around the world, check GetYourGuide:

Powered by GetYourGuide. Become a partner.

A great website to find more information about and a map with exact points of all the different Game of Thrones Malta locations is: https://moviemaps.org

I also found this great video on YouTube with some more Game of Thrones Malta tour and filming locations, have a look:

Have a look at the following Game of Thrones (inspired) items, makes a great gift for the fan of the series!